I’ve been feeling very afraid lately. This Trump business is as bleak as they come and, for my part, much worse than imagined. In the context of my trip to Berlin where I was reminded of the Holocaust everywhere, what’s happening in the world now is pretty scary shit.

An then there’s my people: Romanians failed to elect a sane government and instead brought in office the same old commie villains who have now signed an emergency decree making it easy peasy to be corrupt and get away with it. 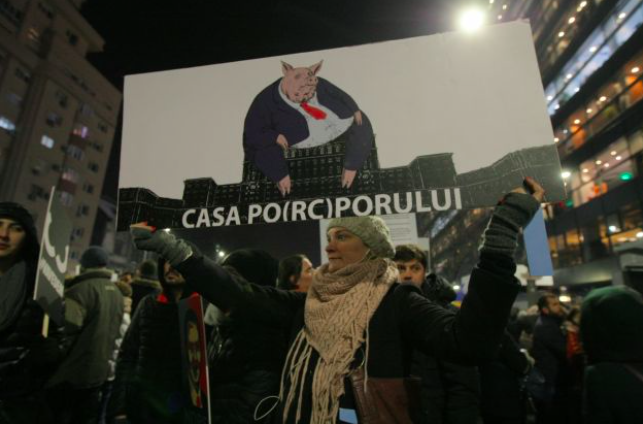 And if that wasn’t enough, the interpreting field is very frustrating to work within, the state does little else these days besides cutting costs here and saving money there, all of it at the interpreters’ expense.

Otherwise I find it hard to cope with winter, I’m still tired all the time and I still need to nap a lot, which I do as soon as the chance arrives. And that in its turn leaves me feeling like I haven’t done anything the entire day, which in its turn makes me feel lazy and inefficient.

END_OF_DOCUMENT_TOKEN_TO_BE_REPLACED

I woke up early-ish, happy to have the place for myself for an hour or so, made some coffee and moved around barefoot in my black silk gown, getting a glimpse of the sun from different corners of the large windows. I read the paper, I had some coffee, the world was a good place to be.

Then I took Sam out for a walk, he’d started some serious howling and followed me around into the kitchen, to the bathroom, opened the door with his snout and howled some more. Ok, okey. “Let’s go out”, I said. I didn’t check the weather and I put on too little clothes (what’s new?!) and consequently froze half to death which turned me into a terrible grinch.

I’ve been feeling like crap since 10:30am and I can’t even begin to fathom why. I feel I should be putting a bit more effort into this “enjoying” winter, but all I ever feel like is drinking cocoa and staying inside. Today I should vacuum and wash the floors and bake and read and this and that, but instead I grrr. I’m not even sad, I’m just grr.

Outside it’s sunny and I and Sam were supposed to go ice-skating on a frozen lake with our friend Gordana and her girls and I let them all down without a real reason, other than I just don’t feel like it. I’m having a hard time accepting my moods, I’m worse now than back when I was a teenager, at least no one ever expected a teenager to be reliable, but a 36 years old should.

Maybe I’ll go out for a coffee, maybe I’ll have a nap. Only crap on Netflix and the book I’m reading is so sad, I feel like slapping the girl for not falling for a better guy than that one.

Vast fields of nothingness are sweeping over me, I feel tired without having done a thing and broken without ever having functioned. My mind is a marsh and I’m trying not to fall into it. Nothing seems alluring at all.

I´ll put on another load of laundry. At least I’ll have clean clothes when I decide to leave the house.

Awaiting a real winter or maybe spring, I find it hard to tell the days apart and all I feel like is sleep under the covers. Work has been scarce up until now, but by next week I’ll be back on track and that’ll at least take my mind off the winter blues. I could pack a suitcase and run away with my love to Cuba, where a fellow blogger just spent what seem to have been glorious days.

END_OF_DOCUMENT_TOKEN_TO_BE_REPLACED

I had a couple of days in court outside Oslo, meaning I was away from home for 10-11 hours, and now I´m beat. Although that used to be my daily routine, I reckon I´m getting too old for that. 😉 Today I only want to take Sam for a longer walk, make myself a spinach salad with chicken and parmesan and read a book by the fireplace. Hoping it´s the winter blues, I long for lighter days and more sunshine. Here are some pictures from our latest “adventures”.