As I probably mentioned before, I was going to England for a baking and photography workshop with Marte Marie Forsberg, hoping to get away from my somewhat stressful interpreter life and to catch up a bit with Lavinia, my ex high-school frenemy, now one of my dearest friends. And so I packed a few things to wear- obviously the wrong clothes and shoes, ’cause I’m a notoriously bad packer- two books and off I went. The first two days I stayed at Lavinia’s in London, in Burnt Oak, aka Little Romania, in a charming townhouse with a giant fig tree and two teenagers too shy for their own good. We chatted long into the night and I tried to sleep in the day after, but the planets aligned against it: the groceries got delivered at 7, then I had to use de bathroom upstairs when all the house was up, and then, when I was nearly falling asleep, the neighbour’s dog started barking and then again, when I had finally managed the deed, the vacuum cleaner started and it felt like the cleaning lady was hoovering the inside of my brain. So I made myself some coffee and read a bit in my pjs. By noon we went to Hampstead, where I did a bit of vintage, charity and regular shopping and then we all had lunch at this charming Italian restaurant. It was hot, too hot for England, and I so I rolled my pants up like a child to be able to bear with it without complaining. And the glass of rosé sure helped some.

On the second day I met Aurora, my old high school friend, whom I’d fallen out with 22 years ago and only got in touch with on Facebook a few years ago. Haha! We grabbed a sandwich and a coffee and had a picknick in the park, filling each other in about ourselves and our old colleagues, happy to find we were still the same and yet so different from our 16 years’ old selves. 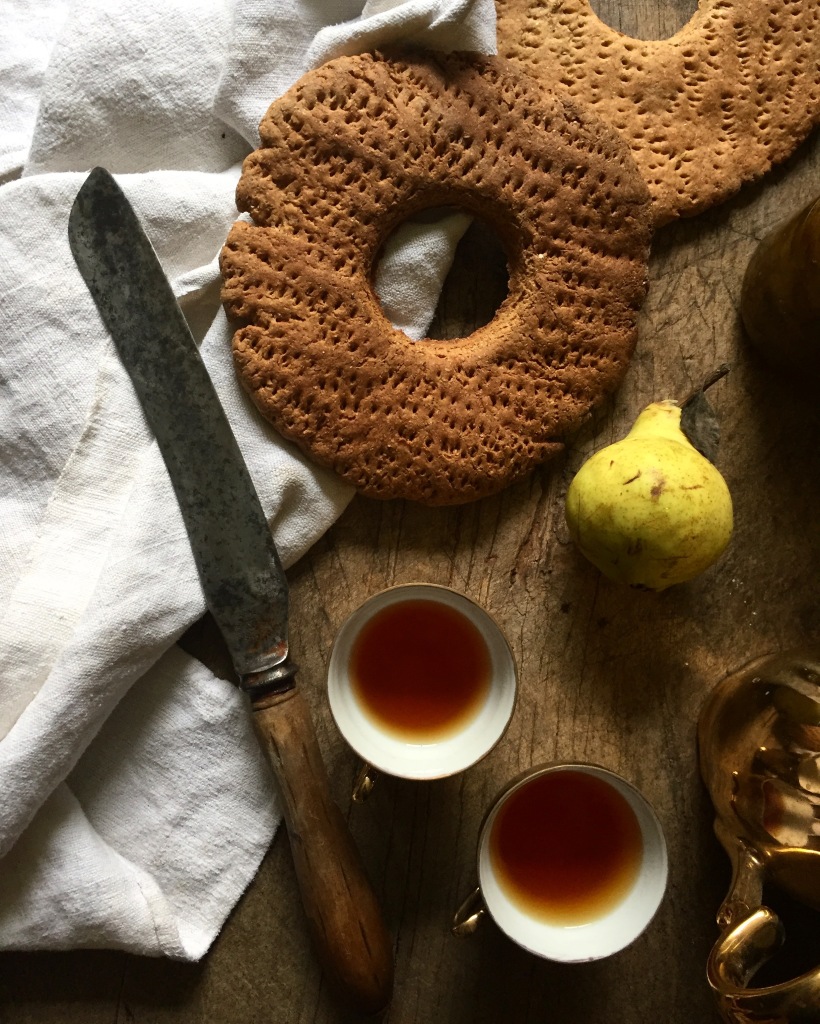 Friday evening Lavinia and I bought some salad, sushi, Prosecco as well as glittering plastic glasses and got on a train to Shaftesbury in Wiltshire, where I was attending the above-mentioned two-days workshop. We checked in at The Retreat, after finding the keys under a pot of flowers in the back yard, threw our clothes on the couch, made some tea and put our feet up. Lavinia called it a night pretty early, I stayed up for a while to catch up on my reading. Read while you can, you never know when depression hits again and the thoughts darken, leaving no room to concentrate.

On Saturday we started early, I made myself a cup of instant coffee first and then we went downstairs for an elaborate English breakfast with poached eggs and bacon, fruit and tea. Lavinia stayed indoors to read and relax whereas I got picked up by Marie for the workshop. We drove to an amazing kitchen garden that used to belong to an old estate where we picked some lavender, we stole a couple of raspberries that melted on our tongues and then headed for her cottage to start baking.

We made knead free bread, rye pretzels, butter and pear marmalade and while she talked about the light, I listened carefully. I told her my biggest problem is my lack of patience, but that I have the time and the enthusiasm, maybe even the “photographer’s eye”, if I were to brag a little. She showed me how to tell a story with a picture and then I did a bit of styling myself. I said it wasn’t fair, that I did not live in a 18th century cottage where everything was so charming and instagramable. She replied that even though that was true, a few moves did the trick. I petted Mr. Whiskey one too many times and kissed him on the snout. I was hungry and thirsty for Prosecco and it was time for lunch.

Her endearing English gentleman was our chef and our bartender, in addition to being a pleasant company at the table and around the house. We ate outside, in the garden, under this amazing tree that I forgot to check out closely. haha! It smelled of lavender and thyme and bumblebees were flying around with this buzz so typical of summer.

We toasted for love, freelance life and pursuing one’s dreams. And then we tried this fantastic Burata with lemon zest, thyme and olive oil. We had another sip of Prosecco, speaking of friendship and foreign habits, of Brittish politeness and my instant infatuation with the English countryside. 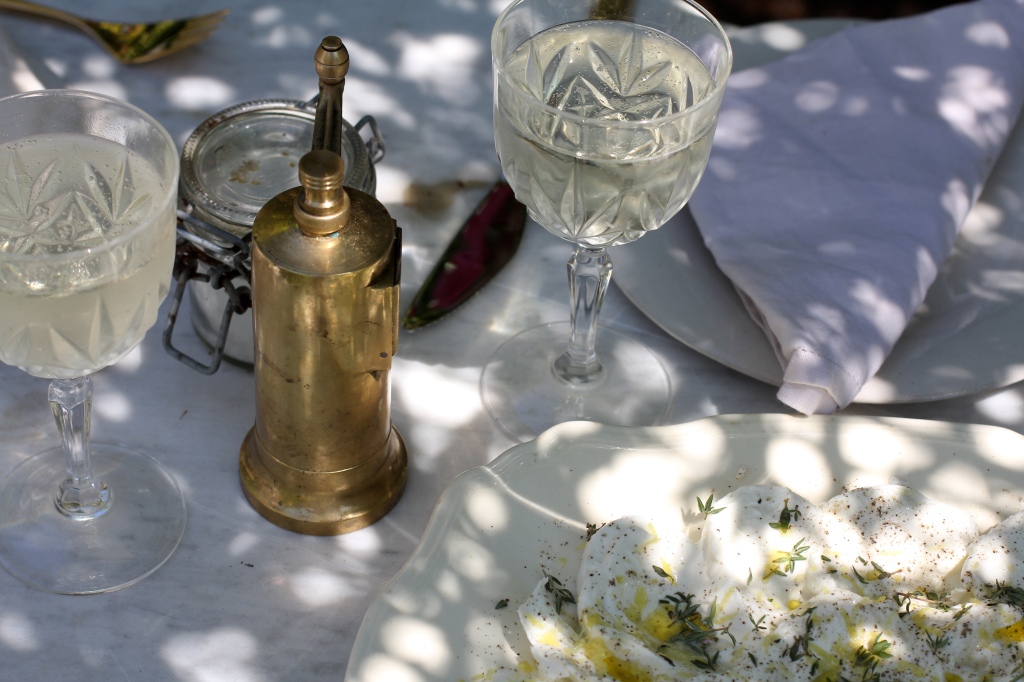 The second course was pasta with tomato and worcestershire sauce, the chef’s concotion and oh so yummy! I’ll try to recreate it at home, but it won’t be the same as the light doesn’t dance on our table on the balcony and my cutlery is not golden. 😉 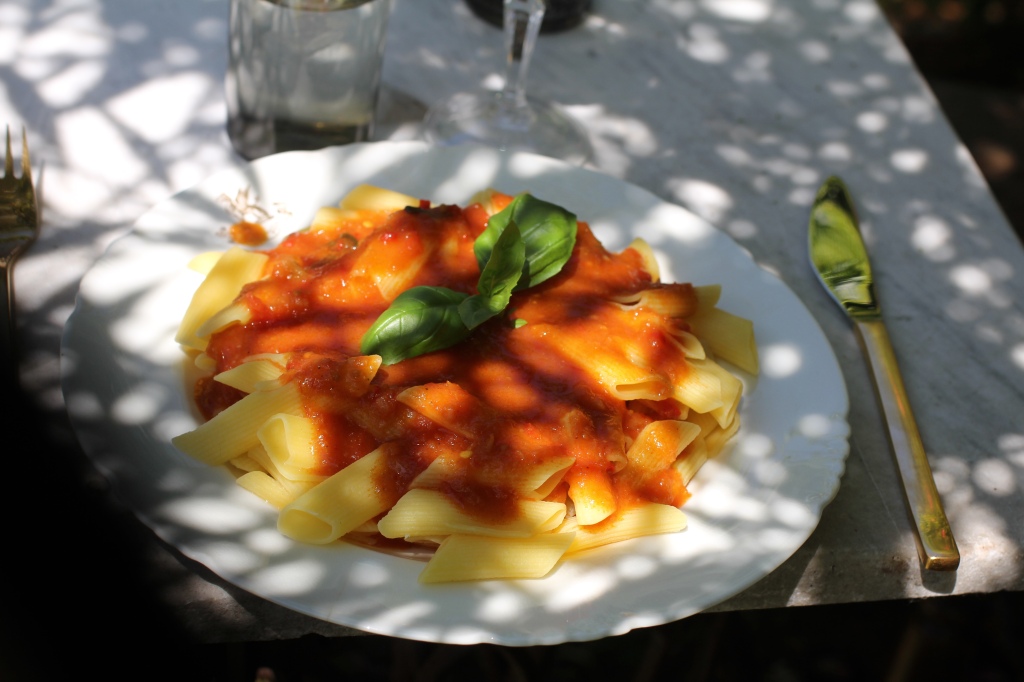 Marie is such an inspirational person, she makes everything seem so easy and that with a 4 and a half month baby, too! You know me, always getting in trouble for speaking my mind, so you’ll have to trust me when I say I’m not to sugarcoating my experience. Besides, if people strike me as too lofty, I somehow manage to categorize them as lacking in substance, but that was not at all the case here! I’ve learned more during this weekend than in my entire blogging life! ❤

And of course it helps to have the tools, the props and the surroundings, but in the end the only person stopping us from living out our dream is ourself. So by the end of the workshop, before getting back on the train to London and further to Gatwick, to embark on a plane to Oslo, I almost saw myself in a stone cottage in the French countryside, living off the land and my creativity, with Sam by my side, a month at a time, F working at this architectural projects from his study, a baby clinging on my arm and a cat lounged in the garden. What do you reckon? 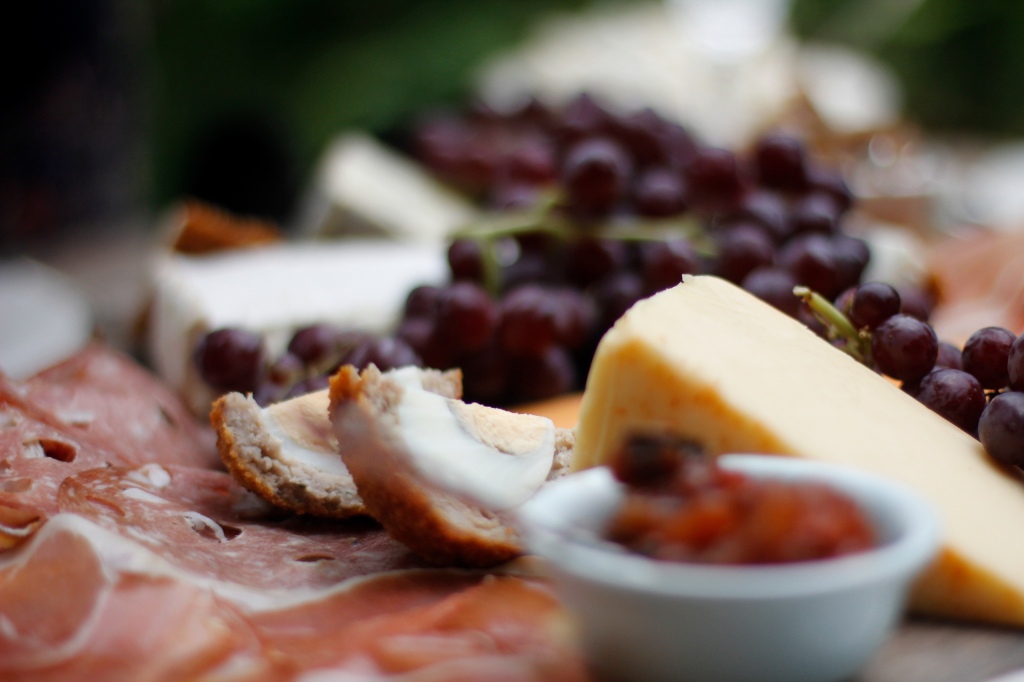 I’ll be back to share some recipes, too, this was only the introduction! Tell me if you felt inspired, though! ❤

One thought on “The English Countryside”